Skip To Content
On Unikernels – Which is Heavier – VMs or OSes?

Many times, new technologies seem deceptively simple – but I have never found them to actually be simpler. I have always loved the deep technical underpinnings of computing and that’s why I often write about how things like Containers, Unikernels, and Serverless work under the covers. Recently, I was at DevConf in Brno, CZ and I watched Michael Bright talk about Unikernels (video, presentation). His passion on the topic was genuine and he did a great job covering the state of things. In fact, I liked it so much I chatted with him for about thirty minutes after the talk.

Michael had a drawing in his talk comparing Unikernels to normal OSes. While I think this is a valid way to think about it from a developer’s perspective, it doesn’t convey what is happening technically from an engineering perspective. At best, this is an analogy, not how it works at a virtual machine (in the classical computer organization definition) level: 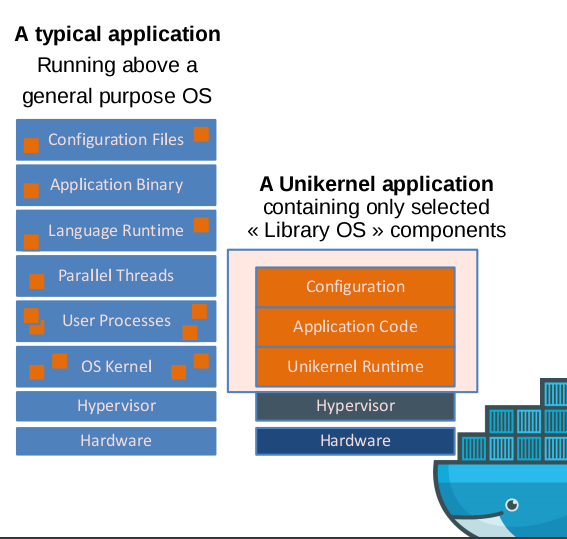 To highlight this, and to reframe this conversation from a multi-level computing perspective, I have modified the drawing I used in my Container Portability Series to create a side by side look at Unikernels. This will allow us to deduce where Unikernels might useful and where they might make things more difficult. Below, is a drawing and brief description of each level of computing:

Every level represents a virtual machine in the classical sense.  Virtual machines convert languages in one of two ways – interpretation (runtime) or translation (compile time).

Looking at them side by side from a multi-level computing perspective it is much easier to see the following things:

It will be interesting to see where unikernels go, but today, there is a necessary trade off when removing some of the virtual machines – such as posix operating systems, C/C++ and assembly) we have come to rely on. I think this will be useful for specialized workloads such as NFV, cloud provider middleware (e.g. the software they run such as SQS), embedded and perhaps even HPC workloads, but I am still pretty skeptical that this trade off makes sense for business logic applications such as web and mobile applications which are essentially information processing vs. analytical processing.