Skip To Content
A Comparison of Linux Container Images

To fully understand how to compare container base images, we must understand the bits inside of them. There are two major parts of an operating system – the kernel and the user space. The kernel is a special program executed directly on the hardware or virtual machine – it controls access to resources and schedules processes. The other major part is the user space – this is the set of files, including libraries, interpreters, and programs that you see when you log into a server and list the contents of a directory such as /usr or /lib.

Historically hardware people have cared about the kernel, while software people have cared about the user space. Stated another way, people who enable hardware, by writing drivers do their work in the kernel. On the other hand, people who write business applications write their applications in user space (aka Python, Perl, Ruby, Node.js, etc). Systems Administrators have always lived at the nexus between these two tribes managing both hardware, and enabling programmers to build stuff on the systems they care for.

The beauty of the container paradigm is that these two worlds can be managed separately both in time and space. Systems administrators can update the host without interrupting programmers, while programmers can select any library they want without bricking the operating system. 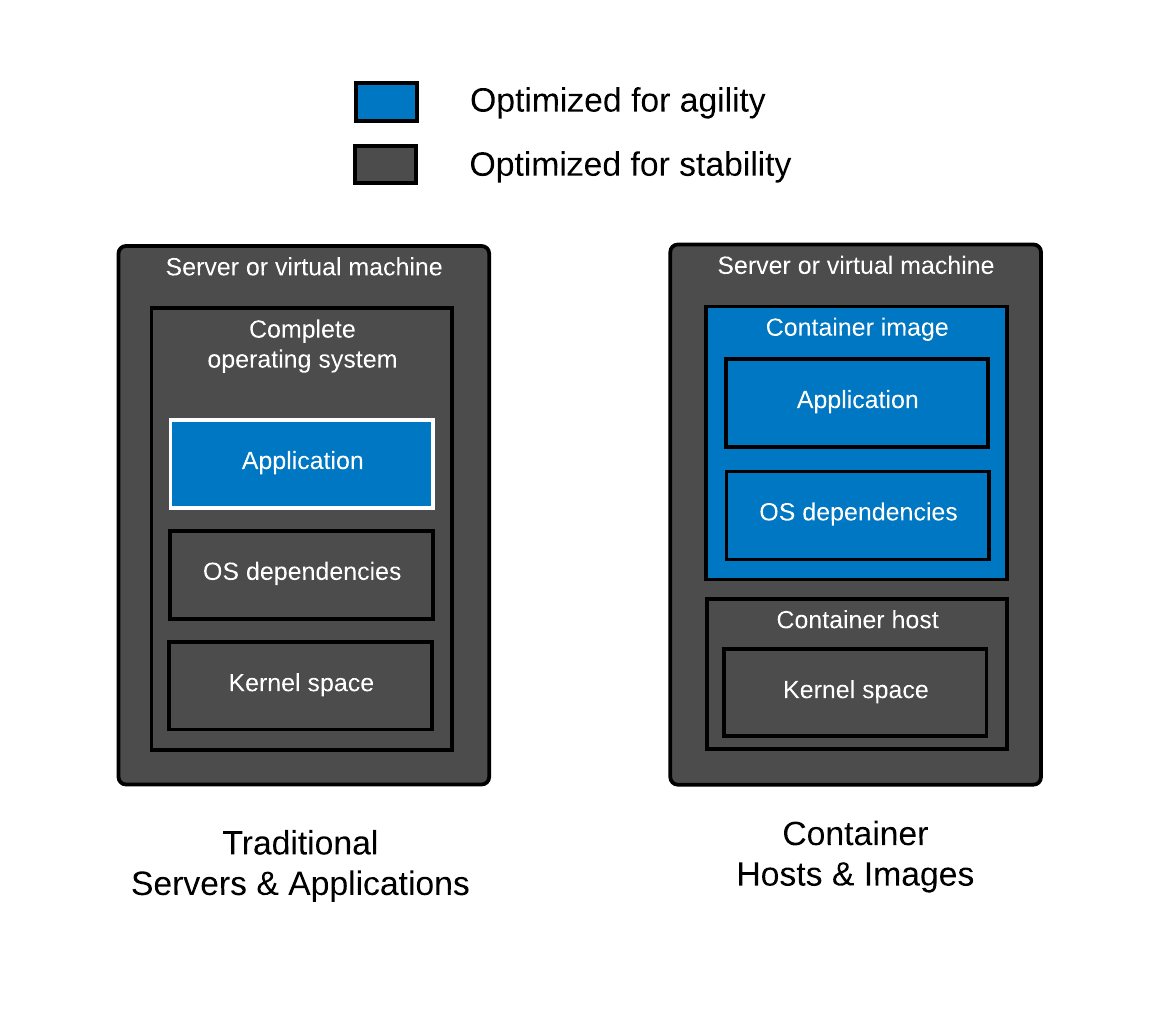 As mentioned, a container base image is essentially the userspace of an operating system packaged up and shipped around, typically as an Open Containers Initiative (OCI) or Docker image. The same work that goes into the development, release, and maintenance of a user space is necessary for a good base image.

Typically, this comes from an operating system installer (like Anaconda) or tooling that uses the same metadata and logic. We refer to the output of an operating system installer as a root filesystem, often called a rootfs. This rootfs is typically tweaked (often files are removed), then imported into a container engine which makes it available as a container image. From here, we can build layered images with Dockerfiles. Understand that the bootstrapping of a base image is fundamentally different than building layered images with Dockerfiles.

Since a container base image is basically a minimal install of an operating system stuffed in a container image, this article will compare and contrast the capabilities of different Linux distributions which are commonly used as the source material to construct base images. Therefore, selecting a base image is quite similar to selecting a Linux distro (See also: Do Linux distributions still matter with containers?).  Since container images are typically focused on application programming, you need to think about the programming languages and interpreters such as PHP, Ruby, Python, Bash, and even Node.js as well as the required dependencies for these programming languages such as glibc, libseccomp, zlib, openssl, libsasl, and tzdata.  Even if your application is based on an interpreted language, it still relies on operating system libraries. This surprises many people, because they don’t realize that interpreted languages often rely on external implementations for things that are difficult to write or maintain like encryption, database drivers, or other complex algorithms. Some examples are openssl (crypto in PHP) , libxml2 (lxml in Python), or database extensions (mysql in Ruby). Even the Java Virtual Machine (JVM) is written in C, which means it is compiled and linked against external libraries like glibc.

What about distroless? There is no such thing as distroless. Even though there’s typically no package manager, you’re always relying on a dependency tree of software created by a community of people – that’s essentially what a Linux distribution is. Distroless, just removes the flexibility of a package manager. Think of distroless as a set of content, and updates to that content over some period of time (lifecycle) – libraries, utilities, language runtimes, etc, plus the metadata which describes the dependencies between them. Yum, DNF, and APT already do this for you and the people that contribute to these projects are quite good at doing it. Imagine rolling all of your own libraries – now, imagine a CVE comes out for libblah-3.2 which you have embedded in 422 different applications. With distroless, you need to update everyone of your containers, and then verify that they have been patched. But they don’t have any meta-data to verify, so now you need to inspect the actual libraries. If this doesn’t sound fun then just stick with using base images from proven Linux distributions – they already know how to handle these problem for you.

This article will analyze the selection criteria for container base images in three major focus areas: architecture, security, and performance. The architecture, performance, and security commitments to the operating system bits in the base image (as well as your software supply chain) will have a profound effect on reliability, supportability, and ease of use over time.

And, if you think you don’t need to think about any of this because you build from scratch, think again: Do Linux Distributions Matter with Containers Blog – Video – Presentation.

Let’s explore some common base images and try to understand the benefits and drawbacks of each. We will not explore every base image out there, but this selection of base images should give you enough information to do your own analysis on base images which are not covered here. Also, much of this analysis is automated to make it easy to update, so feel free to start with the code when doing your own analysis (pull requests welcome).

When evaluating a container image, it’s important to take some basic things into consideration. Which C library, package format and core utilities are used, may be more important than you think. Most distributions use the same tools, but Alpine Linux has special versions of all of these, for the express purpose of making a small distribution. But, small is not the only thing that matters.

Changing core libraries and utilities can have a profound effect on what software will compile and run. It can also affect performance & security. Distributions have tried moving to smaller C libraries, and eventually moved back to glibc. Glibc just works, and it works everywhere, and it has had a profound amount of testing and usage over the years. It’s a similar story with GCC, tons of testing and automation.

Here are some architectural challenges withcontainers:

Moving into the enterprise space, it’s also important to think about things like Support Policies, Life cycle, ABI/API Commitment, and ISV Certifications. While Red Hat leads in this space, all of the distributions work towards some level of commitment in each of these areas.

When you are choosing the container image that is right for your application, please think through more than just size. Even if size is a major concern, don’t just compare base images. Compare the base image along with all of the software that you will put on top of it to deliver your application. With diverse workloads, this can lead to a final size that is not so different between distributions. Also, remember that good supply chain hygiene can have a profound effect in an environment at scale.

Note, the Fedora project is tackling a dependency minimization project which should pay dividends in future container images in the Red Hat ecosystem: https://tiny.distro.builders/

Mixing images and hosts is a bad idea. With problems ranging from tzdata that gets updated at different times, to host and kernel compatibility problems. Think through how important these things are at scale for all of your applications. Selecting the right container image is similar to building a core build and standard operating environment. Having a standard base image is definitely more efficient at scale, though it will inevitably make some people mad because they can’t use what they want. We’ve seen this all before.

Every distribution provides some form of package updates for some length of time. This is the bare minimum to really be considered a Linux distribution. This affects your base image choice, because everyone needs updates. There is definitely a good, better, best way to evaluate this:

Again, this is a place where Red Hat leads. The Red Hat Product Security team investigated more than 2700 vulnerabilities, which led to 1,313 fixes in 2019. They also produce an immense amount of security data which can be consumed within security automation tools to make sure your container images are in good shape. Red Hat also provides the Container Health Index within the Red Hat Ecosystem Catalog to help users quickly analyze container base images.

Here are some security challenges with containers

All software has performance bottlenecks as well as performance regressions in new versions as they are released. Ask yourself, how does the Linux distribution ensure performance? Again, let’s take a good, better, best approach.

Once again, this is a place where Red Hat leads. The Red Hat performance team proactively tests Kubernetes and Linux, for example, here & here, and shares the lessons learned back upstream. Here’s what they are working on now.

I think any comparison article is by nature controversial. I’m a strong supporter of disclosing one’s biases. I think it makes for more productive conversations. Here are some of my biases:

Even though I work at Red Hat, I tried to give each Linux distro a fair analysis, even distroless. If you have any criticisms or corrections, I will be happy to update this blog.

42 comments on “A Comparison of Linux Container Images”