This script was developed last year to give a quick and dirty analysis of the Snort alert log. In typical fashion, it’s is far from perfect, but approximately right is better than absolutely wrong. Obviously, the intersects could be combined in new and creative ways, this is just one that works for us. Also, notice that petit is used to graph the snort alerts to give an idea of when the attacks signatures are occurring. 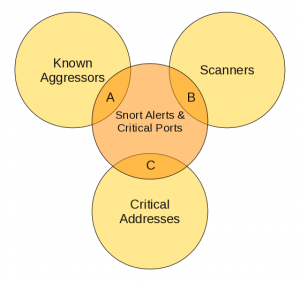 The first intersect is between snort alerts and critical ports.

We only watch for a specific list of ports in which have access granted through the firewall and which have actively running ports. This list is hand generated with an nmap scan externally to our network.

The second intersect is between the three major types mentioned below

#!/bin/bash
#
# Written: Scott McCary
# Date: 10/2009
# Description: Snort reporting script which displays all events which correlate
# a list of known aggressors, external IP addresses and critical poorts.
#
# Aggressors: List of top IP addresses which have been identified as origins
# of viruses, trojans, hackers, etc
#
# Ports: List of ports known to be open through our firewall. These are verified with
# port scans into our network.
#
# Scanners: List of IP addresses which have scanned our network within the last XX
# timeframe.
#
#

for name in cat /usr/local/arnold/etc/servers.txt
do